Announcement
We're excited to offer 2 Domestic Semesters this fall. Learn about the Dragons Community Relief Fund and COVID-19 Updates &  Refund Policy
« Back to all Instructors 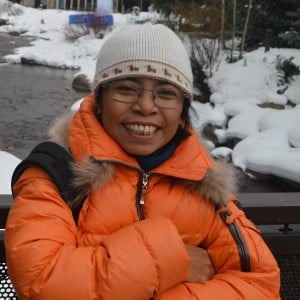 Rita was born and grew up in a small city called Yogyakarta (Jogja), Indonesia. She spent most of her time in her home town until she met many travelers from all over the world at her full time job with Vagabond International Youth Hostel.

Rita was a student at Sanata Dharma University, Department of English Education. Since then she always wanted to meet people and to travel – and her dream is coming true! For Indonesian people, traveling is not an easy thing to do. However, she believes in it, and the path to travel is open for her. Rita’s half-year trip to Norway and the Netherlands in 1996 was also her first ever flight, and she knew that she would keep traveling after that.

Rita has worked with Professor Stein Kristiansen, from Agder University in Norway, for many years. She assists his students doing research in the remote villages in Java, organizing the home-stays in those places which have a lack of resources, lack of infrastructure, and limited water. Through this work, Rita learned more about her own country, its people, and its culture, while at the same time gaining more knowledge about European culture. She learned to see things from a different point of view.

She respects people and values this life because each individual is unique and has something to offer to the world. Each year for the last ten years, she has spent three months in Holland and visiting surrounding countries. In the Netherlands, she worked for Tong Tong Fair in The Hague, the biggest festival in the world for European-Indonesian culture. She loves to travel, but always loves to come back home and appreciate more about her life back home. She worked for 15 years as a tour leader for Joker Avontuur, Belgium and ViaVia travel, guiding European travelers in Indonesia. She has also visited other countries in Asia. She has worked for Dragons for several years and loves working with the incredible students that come on Dragons courses.